BAREILLY: The state government on Thursday suspended 22 forest officials in Pilibhit, including the sub-divisional officer and three rangers, for illegal felling of trees in the Pilibhit Tiger Reserve. Divisional forest officer (DFO) of Pilibhit Rajeev Mishra was suspended on similar charges four days back. Forest officials say the action came after a report in the matter was submitted by the Local Intelligence Unit (LIU) to the state government. No departmental inquiry, however, was conducted before the suspensions were announced. It was reported that Pilibhit district magistrate Om Narayan Singh had asked the LIU to probe the matter about two months ago. The order of suspension, however, did not mention how many trees had been cut down, or when and where the tree-felling occurred. The order also does not mention the role of the suspended officials in the illegal felling of trees. 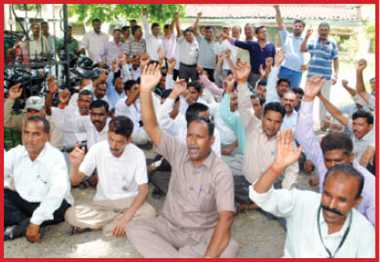 On receiving the order of suspension from work, officials against whom the action was taken raised slogans outside the office of the divisional forest officer, claiming that the allegations against them had no basis. The demonstrators submitted a memorandum to chief minister Akhilesh Yadav, the local MP and Union minister for women and child welfare, Maneka Gandhi, the district magistrate and other senior state forest officials. The demonstrators demanded that a committee conduct an impartial inquiry into the allegations against them, and warned that they would continue to protest until their demands are heeded. “Forest authorities have not conducted the inquiry. It was done by the LIU. If needed, we will challenge the suspension in the high court.” Anil Shah, suspended ranger, said. Divisional forest officer of Pilibhit Kailesh Pratap said, “The action came after a report was submitted by the LIU. No departmental inquiry was held.” The district magistrate of Pilibhit Om Narayan Singh refused to comment on the matter.

As Posted in Timesofindia.indiatimes.com